Message in a bottle

Lunes tagged me for the Mimi's Message In a Bottle Meme. Since I don't want to end up in a virtual dungeon I better pass this on.

But first a short story about messages in the bottle. When I was younger, about 14 or 15 (Omg!! That was almost 25 years ago!!!) I thought it would be a great thing to throw few bottles to the ocean. Before we went to our summer vacation to Croatia I prepared 3 bottles and 3 messages in few different languages. Message contained explanation why I am doing this and my address and date so that the finder could let me know when and where the bottle was found. My dad was quite enthusiastic about this idea so we went to the open sea with our little boat and I threw the bottles to the water, but not all in the same place. I was hoping bottles would travel a long way and end up on the other side of the world or something like that :). When we got home after 3 weeks, there was already a postcard waiting for me from Slovenian couple who found my bottle near the place where we were staying. They said it was amazing to found a bottle and that it was the greatest thing for them that summer. Cool. One was saved. About a year later I got another note, from Venice, Italy. That means that bottle traveled about 200 km. Even better. The second one was saved, too. The third one... well, I don't know if it was ever found. I like to think it is still floating somewhere in the oceans, traveling around the world, or waiting on some nice sandy beach on some exotic island for someone to pick it up :).

So, here is my today's message in the bottle: 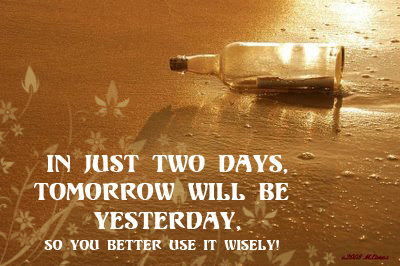 Here are the rules:

You are about to send a virtual Message In a Bottle across the Blog Ocean. Leave a message in the sand or on the bottle. Write anything you wish. Be a pirate or a poet. Serious or silly. Anonymous or not.


What message would you like to send out to the universe?

Message In A Bottle Meme

1. Compose a message to place in your virtual bottle.
2. Right click and SAVE the blank graphic below. 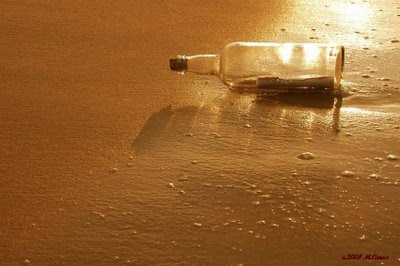 3. Use a graphics program of your choice to place the message on the picture.
4. Post the Message In a Bottle meme and your creation on your blog along with these rules.
5. Tag a minimum of 5 bloggers - or your entire blogroll - to do the same. Notify them of the tag.

Your virtual bottle will remain afloat in the blogosphere ocean for all blogernity (That’s a Mimism for blog + eternity.)

So, if you are tagged by me, go over to Mimi’s and ADD your site to her Mr. Linky list and place your blog’s name and url in a comment HERE TO LET MIMI KNOW YOU’VE COMPLETED THE MEME. Mimi will add it to the master list of message bottles. Email mimiwrites2005 at yahoo.com if you have questions. Participation is optional. Just remember she has a dungeon….and some of you are STILL there from the Band Meme. Have fun!

Since I am not really sure I know someone that would play this and pass it on, I am tagging all of you readers. If you like it, make your message and pass it on. Thanks, it was fun!
Posted by Roberta at 8:49 AM

Roberta what a great story and a wonderful idea to do for children (although now people would see it as not environmentally friendly!)
I wonder if No.3 was ever found....
As for your message for the meme it's perfect and really sums everything up really! Have a great weekend. Kylee x

Great message and greater story! Mimi tagged me too! 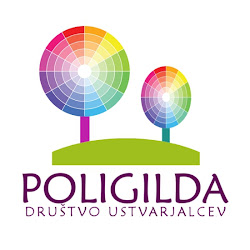